For those who are waiting for MGQ updates, I have 5 pages to go. Pls bear with me.

In the meanwhile, Ohoho did the cast and crew just go on record to say that their author incorrectly used an idiom? Oh yes they did! And I’m having a good time loling

I’m quite impressed with this crew. It seems they are going through the script and improvising on set. In the same vid, they are discussing his outfit’s lack of dragon embroidery (which the female lead originally uses to identify him as royalty) and decided to name drop his palace instead. Yang Mi is quite useless as she excuses herself to go to the bathroom and leave the thinking to Mark rolf.

And then this happens: 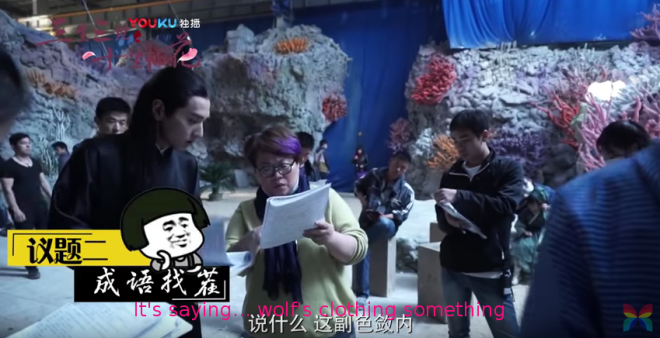 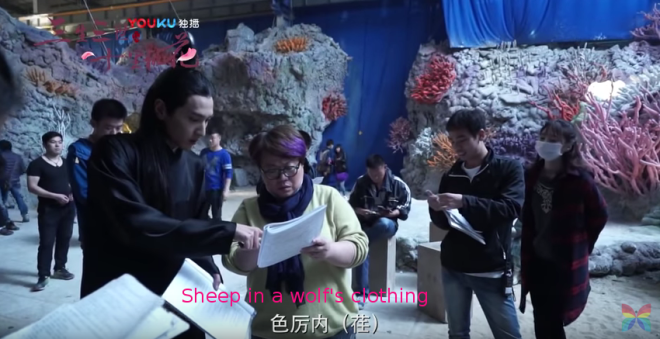 And this is what ended up being used:

They are basically talking about the two idioms 色厉内荏 and 恶言厉色, both having the characters 厉 and 色 in them. The one originally used means “sheep in a wolf’s disguise,” or someone who puts on a front even though they are cowardly inside. The one Mark suggests to use means “speaking harsh words and looking mean.”

This scene is when they met again at the Donghai sea palace, and she scolded him for overstepping his boundary thinking she was his dead wife. And so he said, “I’m sorry, I mistook you for her. She wouldn’t be so _____  like you.”

Have no idea which one She Who Shall Not Be Named meant to use, but Mark’s idiom sure fits the situation a ton better.

I’m still enjoying the drama. The climax for me was the Donghai sea palace episodes. The goodies are still sprinkled here and there, but it was so emotionally satisfying to see how happy YH was to have found his supposedly dead wife again. There’s currently a disconnect in their feelings because she, of course, has forgotten him. And in a lot of ways, she isn’t the Susu that he fell in love with, the one that would cry over a stranger’s injuries or the one whose heart breaks every time he leaves. BQ is a lot more fun, but the romance with SS was more endearing.

I'm alive/not dead :D Just busy moving cross country so I don't have the time/energy for new updates. Hopefully I'll have something up by late June or July. Everyone take care until then!

House rules:
1. Don't ask for updates.
2. Be courteous and civil.
3. Don't post spoilers. Go to Shushengbar for that.